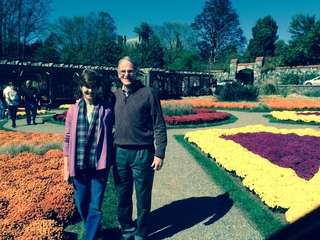 I’ve always considered autumn my favorite season, though last spring almost made me change my mind after the longer-and-colder-than-usual winter we had just been through. At any rate, here we are in the middle of a gorgeous South Carolina autumn already, and we’re just starting to see the first tinges of color. Two weekends ago on a glorious, picture-perfect day, Dan and I took a drive to Asheville, North Carolina, and reveled in the crisp air, the cloudless blue sky, and the early golds and reds of the maple and sweet gum trees. We ate at a wonderful little restaurant in the village outside the entrance of Biltmore and then drove through the estate and admired the gardens decked out in every vivid color of mum imaginable. We stopped to smell the roses, too—literally. The last ones of summer always seem to be especially fragrant, and the winners that day were a deep magenta and a tangy orange.

I had only a few goals for the summer of 2014. In past summers I’ve worn myself out composing lengthy to-do lists, then proudly ticking off items one by one. By the time school started again, I may have accomplished chores galore but wasn’t always rested and ready to get back to teaching. So I decided this past summer would be different. My goals were few and reasonable: organize all our receipts for tax purposes, complete a cross-stitch project to commemorate our grandson’s birth (a year ago), and write ten chapters of a new manuscript.

But things often don’t go as anticipated. If you read my previous newsletter, you already know about the first big unexpected event early in the summer of 2014, but another one was coming. Here’s how that one unfolded.

Dan and I had planned only one trip for the whole summer—to Indiana to visit our son, daughter-in-law, and grandchildren over July 4th. Only four short days, but we couldn’t wait to pack them full. We left home on July 2 and arrived in Ellettsville, Indiana, that evening around 5:00. After driving to our son’s house and greeting them all, the six of us headed to Smokin’ Jack’s Rib Shack in Bloomington. How we enjoyed that meal, just taking our time and catching up with each other. The food was good, of course, but the best part was being with Jess, Kalyn, Svana (5), and Kjell (1).

We finished and were heading out to the car when Dan saw a missed call on his phone and told me I needed to call my sister, who lives in Virginia. So I dialed her number and within seconds heard the news that our mother (88) had been in a serious car accident that afternoon and was in ICU in Greenville, SC, where we live. I was so stunned I could hardly think, but my dear sister told me she was packing to go down to be with Mother, who was actually doing better than expected considering the extent of her injuries—six broken ribs, broken sternum, three spinal fractures, and a shattered ankle. Betsy urged us to finish our visit in Indiana and come home as originally planned. We ended up doing that, though Mother was constantly on my mind and heart during those few days. Betsy stayed two weeks in SC to help out, and I'll never forget that.

Between July 2 and October 29, Mother was in the hospital and a nursing home/rehab facility—almost four months of very slow recovery and physical therapy, then waiting for the ankle to heal, then another round of therapy, then the happy day of returning home just two days ago. This week my sister made another trip from VA to SC to help Mother with the transition, and she'll stay for two weeks. After this . . . well, we don’t know what will happen. Mother wants to live in her own home independently, but time will tell whether she’s able to do that. She also wants to get another car, which makes us fearful. (Doctors and nurses told us she was incredibly "lucky" to survive the collision.) Those are all unknown factors for now. As we've done for the past four months, we'll take one step at a time and lean hard on God's promises for daily grace.

When my teaching duties resumed in mid-August, I knew this semester would be a challenging one—and that has certainly been the case—but Mother has been amazingly brave and cheerful all along this difficult road, which has been an inspiration and example to me. Even on her low days, she has always affirmed her belief in God’s goodness and her trust in His divine plan for her life. She has maintained a sweet testimony to everyone around her—and to me most of all.

Needless to say, the few goals I had laid out at the beginning of the summer were scratched after we returned from our trip to Indiana, but they’ll wait. At least Mother’s house is much closer to us than the nursing home was, so that's a blessing. My sister will have to leave on Nov. 11, so right now I’m enjoying her help to the fullest. Mother is back on her feet. It’s very slow going for her, but we’re thankful she can now put weight on her ankle (full of screws, plates, and pins) and has graduated from the wheelchair to a walker. She’s praying that she’ll be able to walk with only her cane someday.

Time is a funny thing, isn’t it? To Mother the days creep by since she’s so limited in her mobility, but to me they seem to rush by in the blink of an eye, long before I’ve finished half the day’s work. Keeping up with everything is pretty much a dream right now, but I’ve discovered that “Let It Go” is more than just a song title.

In the middle of all this, however, I did have a wonderful signing on August 30 for my new book, To See the Moon Again. Thanks so much to all of you who have written me. I’m working to get some bookmarks made so I can autograph them and send them to any of you who might buy one of my books as a Christmas or birthday gift. I know it’s not quite the same as giving an autographed copy of the book, but if you’re planning to purchase one as a gift, I’d love to do you this small favor, so please drop me a note about that, using the “Contact” button on my website.

God is blessing us daily. Dan has recovered from his heart attack and is feeling good. We celebrated our 43rd anniversary on August 29, paid off our mortgage in early September, and are enjoying a great school year so far.

Here’s hoping you’re enjoying a beautiful autumn wherever you live. (Or whatever season it is in your corner of the world.) God’s creation is truly one of His best gifts to man. May your days be full of His grace and joy!