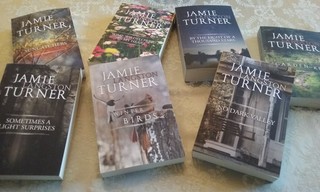 We all know what the "ever-rolling stream" does in Isaac Watts' hymn "O God, Our Help in Ages Past." It "bears all its sons away." And daughters, too.

A pastor made an apt analogy recently of the way time seems to go faster as we get older. He likened it to a car's speedometer. When you're a child, time creeps along at 5 or 10 mph. By your teenage years, the needle has moved up a bit, and in young adulthood it might climb to something like 30-35 mph. When you reach your forties and fifties, you're moving along at the same speed as your age, but by your sixties, your speed has surpassed your age. Then come your seventies, and you're a candidate for a serious fine with your ticket reading "Going 100 in a 70-mph zone." In your eighties, the years are a blur, and if you're blessed with ninety or more years of life, you might be starting to understand better how a thousand years could seem "as yesterday."

Nothing new here. We all know how swift and slippery time is, sweeping away untold hours that we had planned to fill productively. "Tie a knot and hang on" used to be an amusing little saying reserved for critical challenges of life, but now it may be how you start every day.

As I feel this day's rope slipping from my hands, I have two updates to share. First, I've received a good number of questions in the past months about how my new book is coming along, so here's a brief report. I'm now on the last chapter of a read-through and revision of the entire manuscript. Another trip through will happen next, but not as time-consuming and arduous as the first one, I hope.

(Just a little tip for any of you writing a book: The revision will be a lot harder if you extend the writing over too many years!) This particular book would have been a challenge even without the seven or eight years of start-and-stop writing because it weaves together the lives of three primary characters over a timeline of almost two years.

I tend to hold a manuscript in the revision harbor for too long, but I now feel this one straining to get to the open water. So that's my first bit of news. The new book should be sailing soon.

Second, back in June 2021, a new press contacted me about reprinting fresh editions of my first seven books, which have been out of print now for 10-15 years. It was a pleasant prospect, so I began working with them to get the old files set up properly. Their excellent designer created new covers and agreed to fix any errors I had found in the original text. We also updated old bio information and cover copy, and things seemed to be wrapping up nicely sometime in early October, so I was hopeful that the new books would be available by Christmas.

Then . . . silence during the rest of October and most of November as I asked repeatedly about the progress and received no answer. Later in November the publisher finally responded—with news I never expected. The opening sentence thanked me for "allowing us to work with you," but the next one said, "Unfortunately, our press will be shutting down operations, effective immediately."

Shock and disappointment descended, but a glimmer of hope rose when I reread the email and stopped to consider the statement that "all rights are now reverting to you." Did this mean that I owned, free and clear, the new text and cover files for which the now-defunct press had covered all the preparation expenses? I wrote to ask, and they confirmed that the files were now legally mine and I could do whatever I wanted with them, even reprint them myself.

Since I'll never be accused of being a technological wizard, a great deal of fumbling and stumbling ensued as I was coached about how to start this process. I'm now pleased to announce that the seven new editions are available through Amazon and may appear in other sources later (after more fumbling and learning). The novels look like a uniform set now, and the photo above shows them in chronological order, starting in the upper left and moving clockwise: Suncatchers, Some Wildflower in My Heart, By the Light of a Thousand Stars, A Garden to Keep, No Dark Valley, Winter Birds, and Sometimes a Light Surprises. (Note: My 8th book, To See the Moon Again, is not included in the reprints since it is still "in print" with Penguin Random.)

The new ones may not stand out, however, if Amazon still has them mixed in with all the older editions in their various covers and formats. To make it easier for anyone interested in the new editions, therefore, here are the Amazon links for each novel:

Some Wildflower in My Heart

By the Light of a Thousand Stars

My sincere thanks to all of you who have contacted me with comments, questions, pep talks, etc. I truly enjoy learning where you're from, what keeps you busy, how wonderful your family is, how God has blessed you, and anything else you choose to share.

In closing, I thought I had posted my last newsletter in February 2021, but one of you recently told me it was December 2020. I checked and you were right. Obviously, I don't need to tell anyone about my poor performance in keeping up with that ever-rolling stream of time.